Welcome to the first surface water quantity report of the Orange-Senqu River Commission (ORASECOM), for the hydrological year 2020-2021. For END_OF_DOCUMENT_TOKEN_TO_BE_REPLACED

Documentation and Data: A read-only folder structure of all reports, data, and models related to the STAS can be accessed END_OF_DOCUMENT_TOKEN_TO_BE_REPLACED

Documentation and Data: A read-only folder structure of all reports, data, and models related to this study can be accessed END_OF_DOCUMENT_TOKEN_TO_BE_REPLACED

Documentation: A read-only folder structure of all reports, data, and models related to the STAS can be accessed from here: END_OF_DOCUMENT_TOKEN_TO_BE_REPLACED

Capacity in basic hydrometry is lacking, particularly in Lesotho and Botswana, both in terms of existing personnel being sufficiently capacitated and shortage of staff. In Botswana there is a serious need to develop capacity within the Hydrology Division. In Namibia and South Africa there is a shortage of staff, although essential systems appear to be operating in each country. There is a need to improve the quality of hydrological data throughout the basin. This could be achieved through a combination of infrastructure/equipment related measures and improved capacity and personnel levels.

Although certain areas of the Orange/Senqu basin still have adequate coverage of rainfall
gauges, there has been a significant reduction in operating rainfall stations in most of the sub-catchments of the basin. The current density of rainfall stations that are still open and used in the analysis ranges from between 0.3 and 3.2 gauges per 2500 km2.

Although there appears to be an adequate coverage of the flow gauging stations within the
Orange/Senqu basin, it is of utmost importance that at least the stations used for the
hydrological extension work be maintained to ensure ongoing monitoring. This will ensure that the effects of the ever-increasing water and land-use impacts can be assessed and that the impact of projected trends in the climate can be monitored. Once again the high runoff areas, such as the Senqu (SE), Caledon (CA), Upper Vaal (VU) and the Upper orange (OU), should receive adequate attention when it comes to monitoring.

A relatively fine spatial resolution hydrological model has been developed and it is essential to update the model at regular intervals with land-use changes as they occur to ensure that the hydrological database remains representative. In the Senqu River basin, it may be necessary to revisit the original “agreed hydrology” since it is now possible to create a better rainfall/runoff calibration due to the additional 15 or 20 years of recorded streamflow data now available in Lesotho. 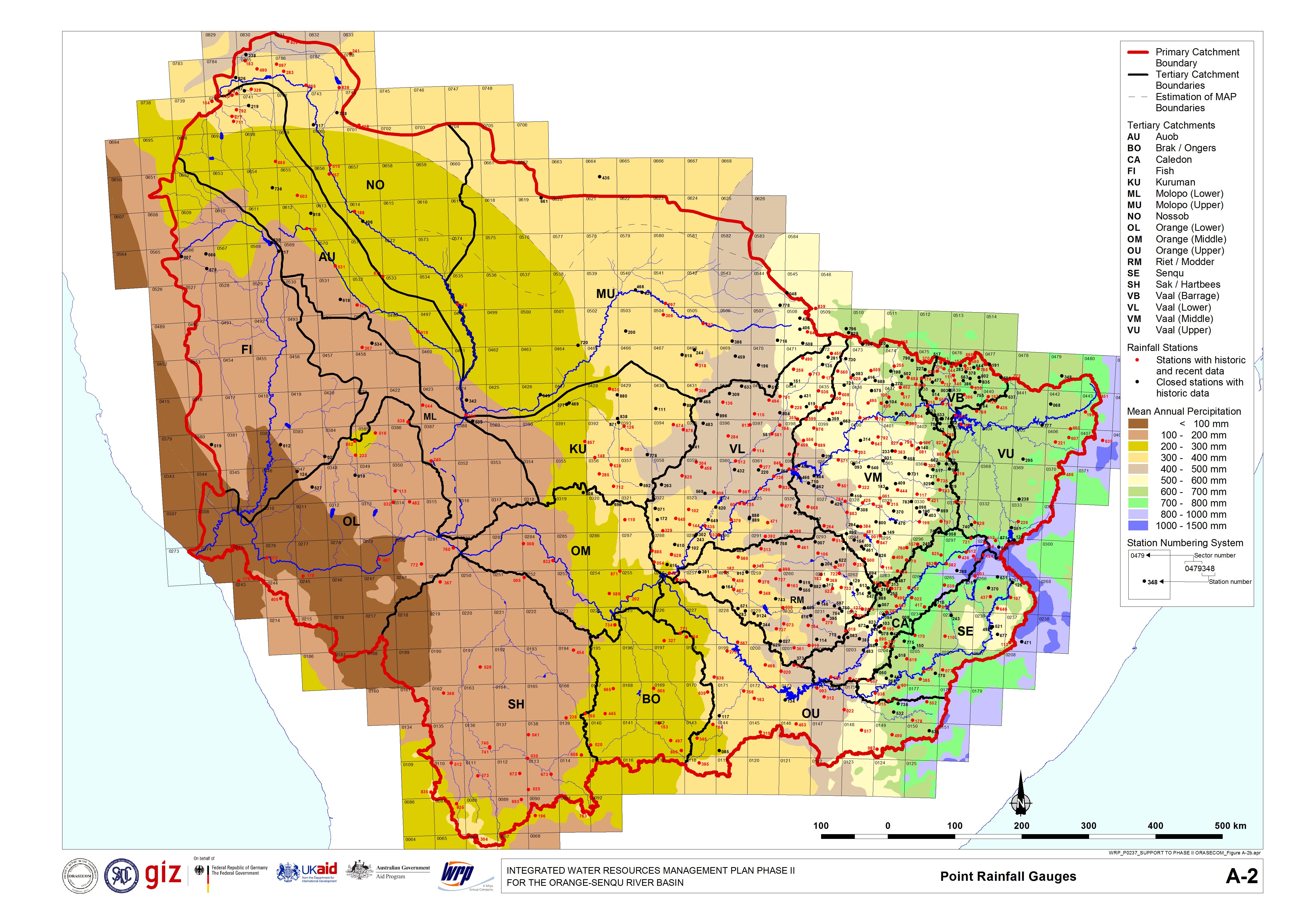 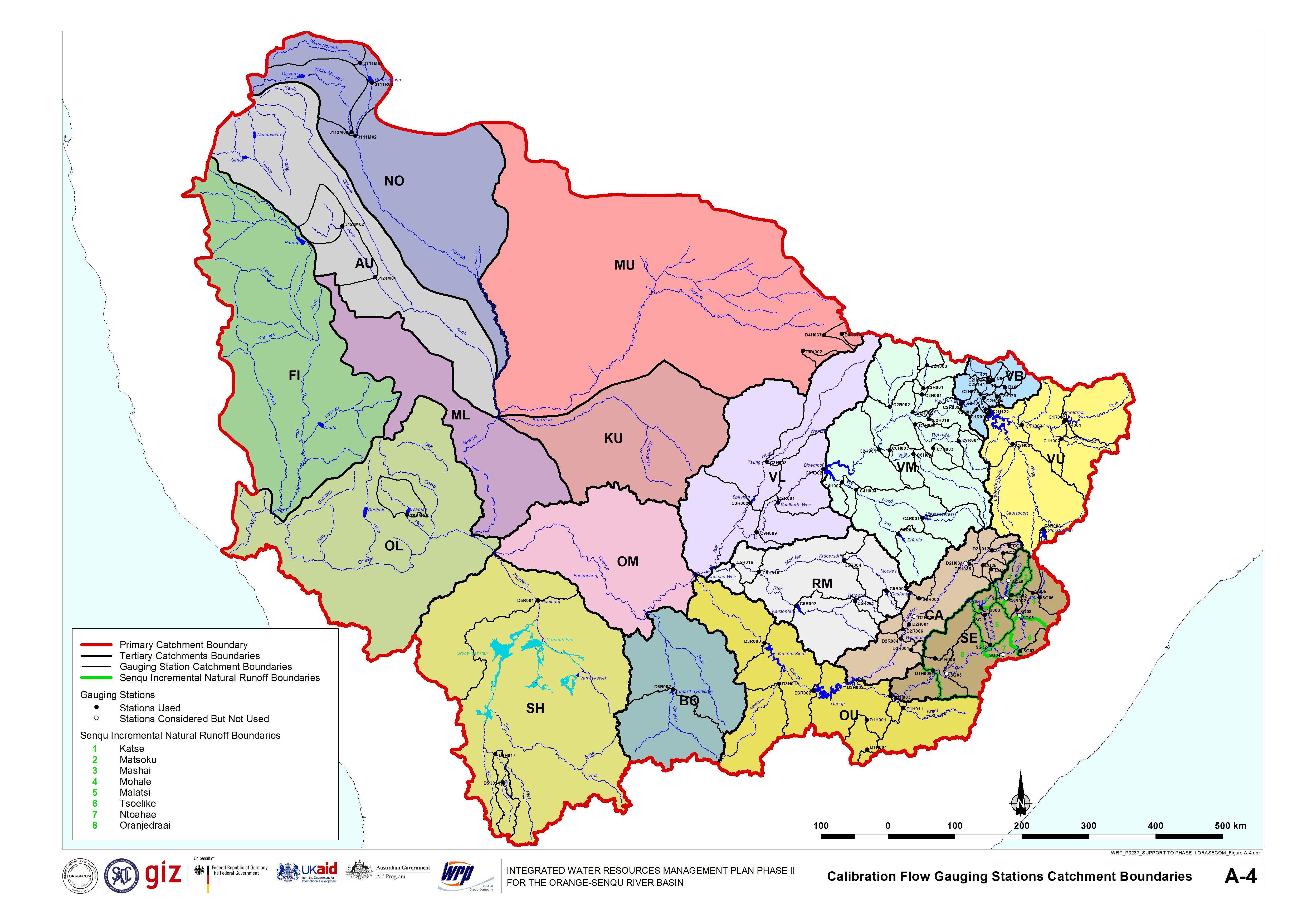 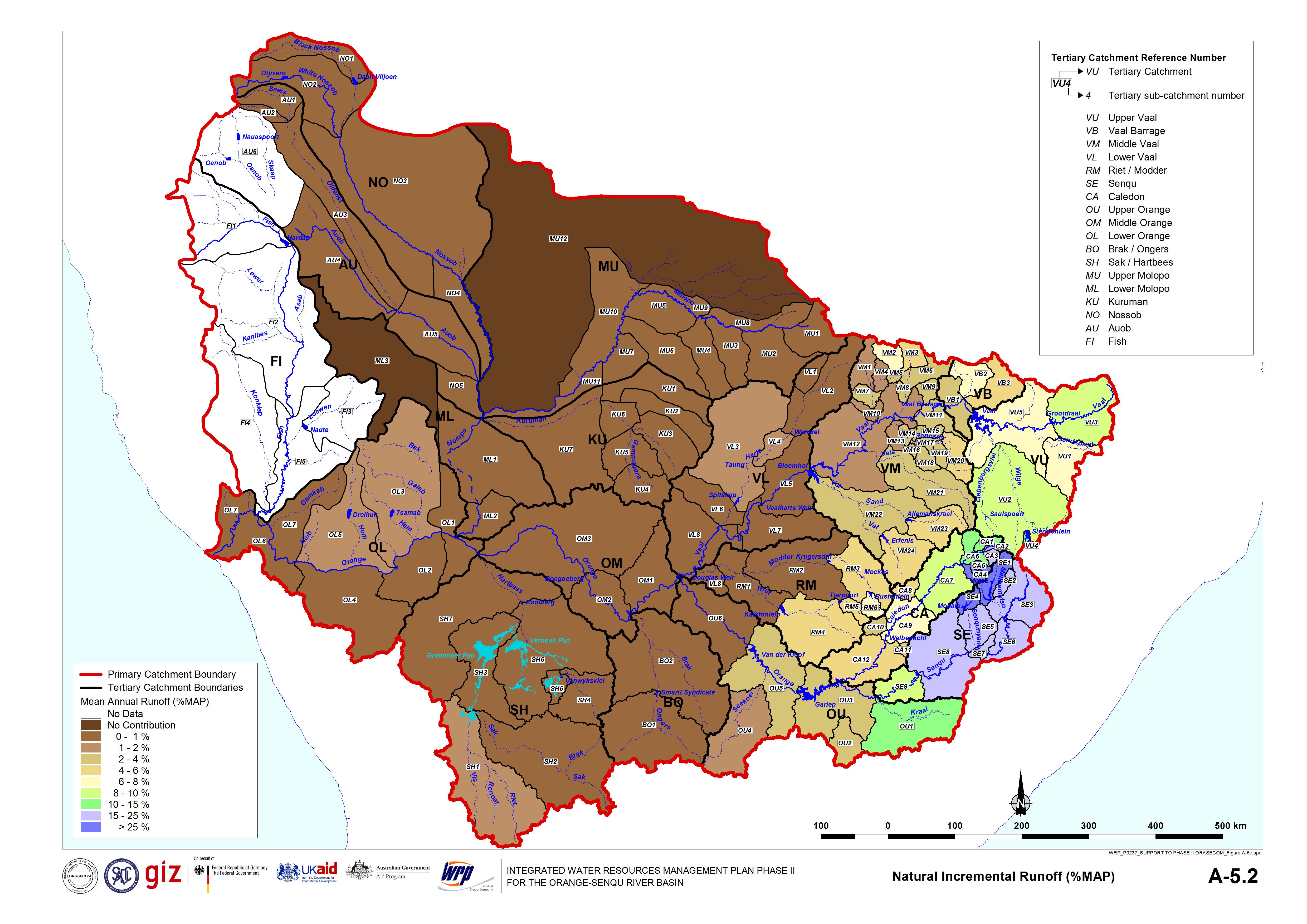 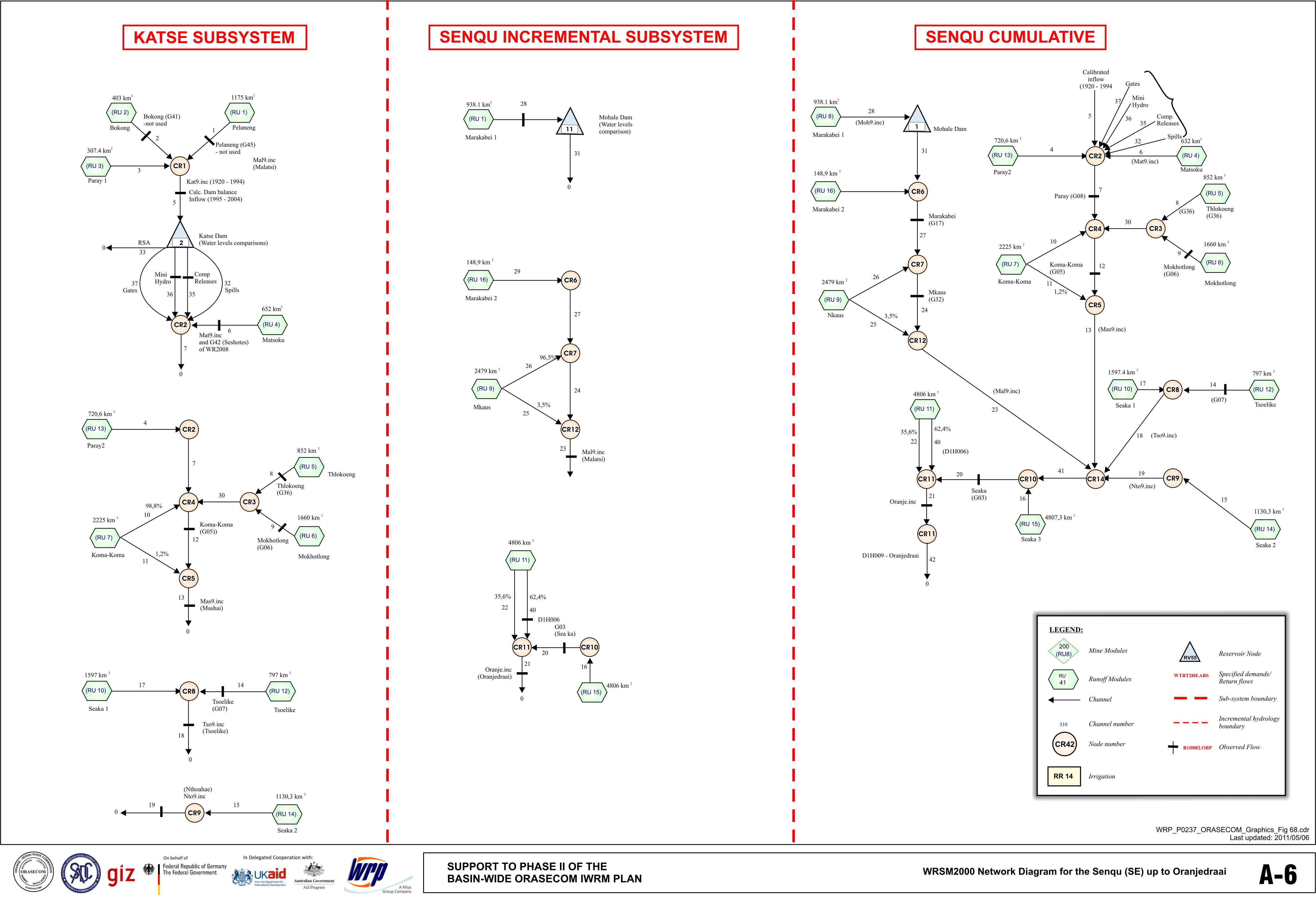 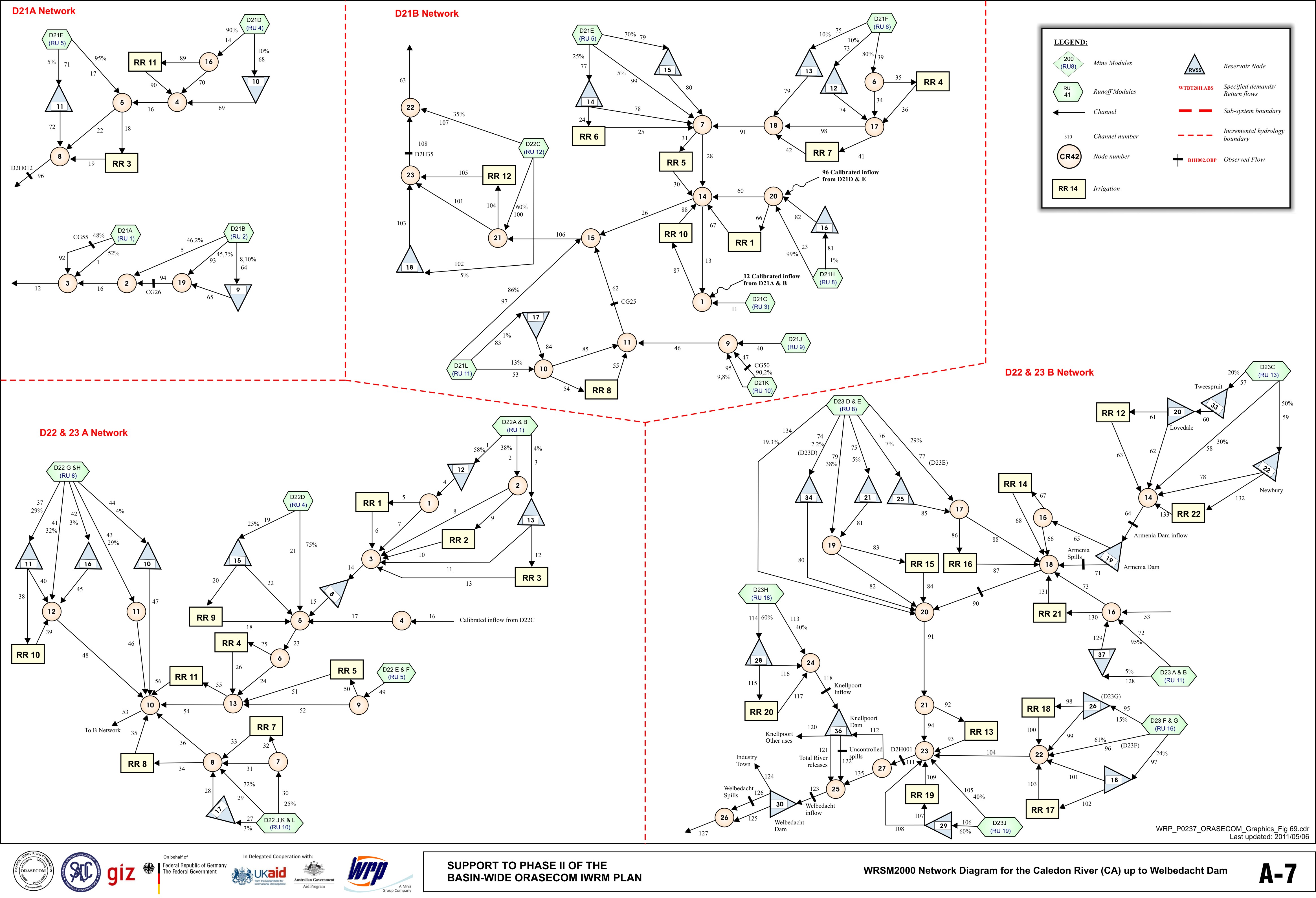 WRSM200 Network of the Caledon River up to Welbedacht Dam 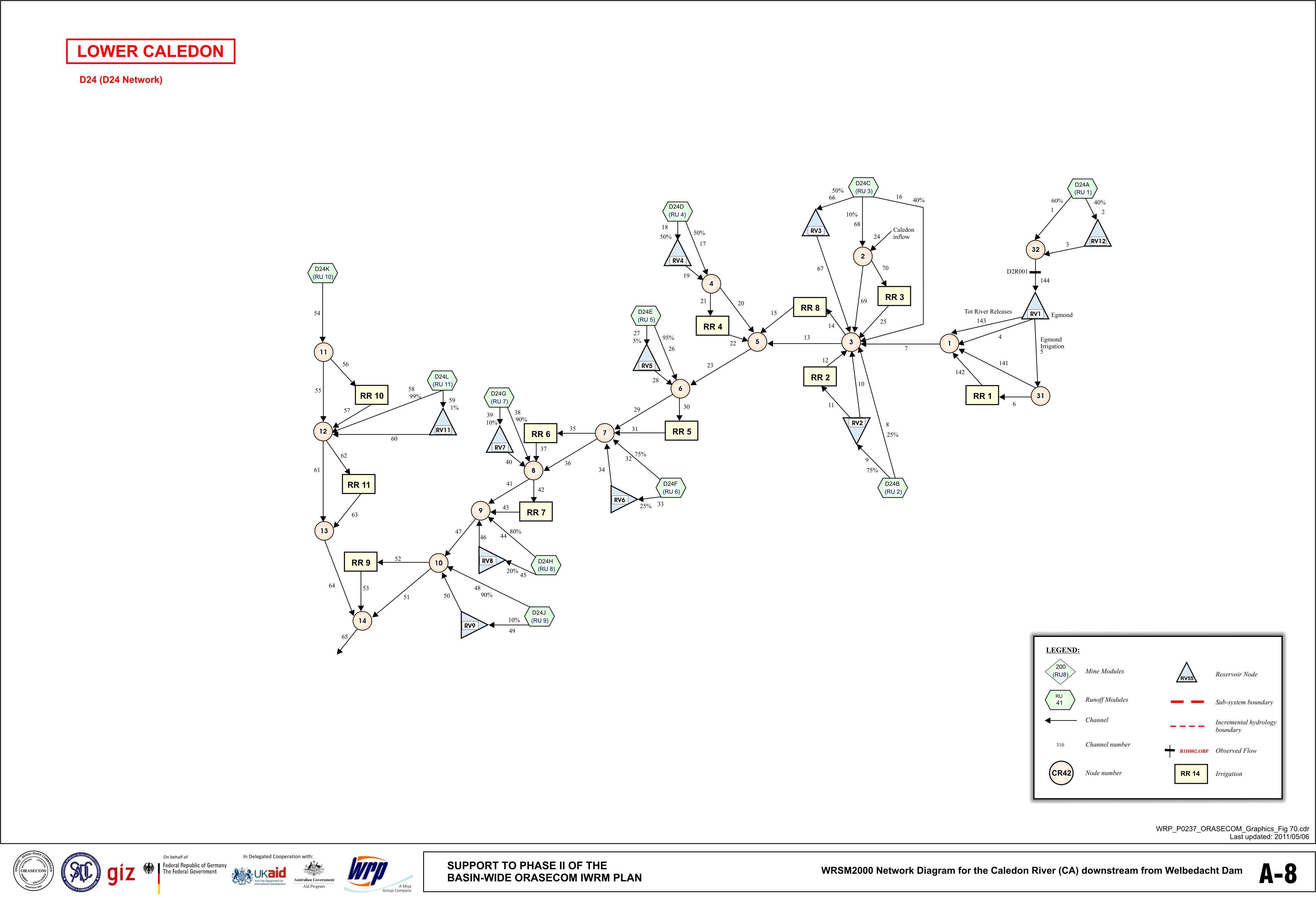 WRSM200 Network of the Caledon River downstream from Welbedacht Dam 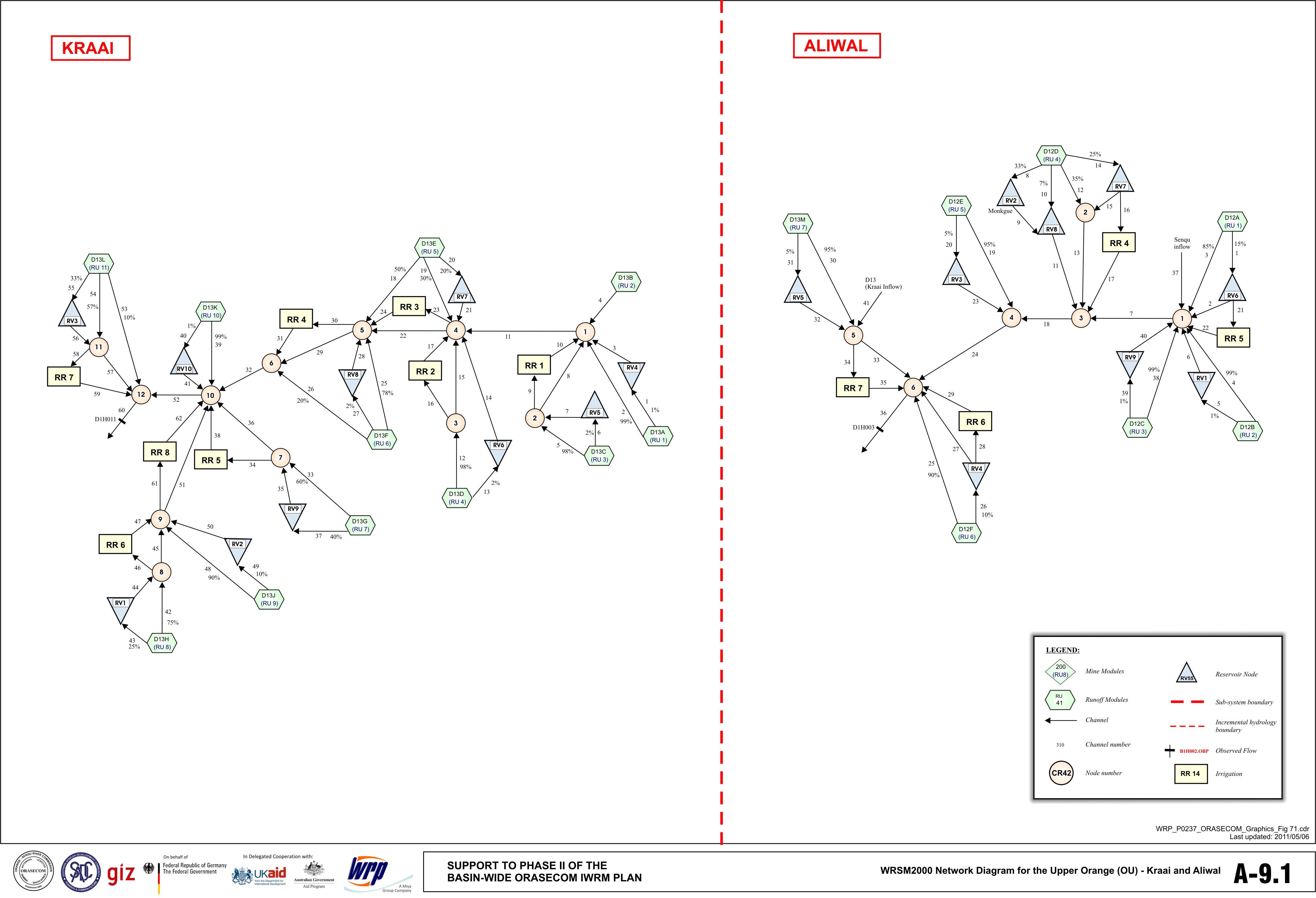 WRSM200 Network of the Upper Orange – Kraai and Aliwal 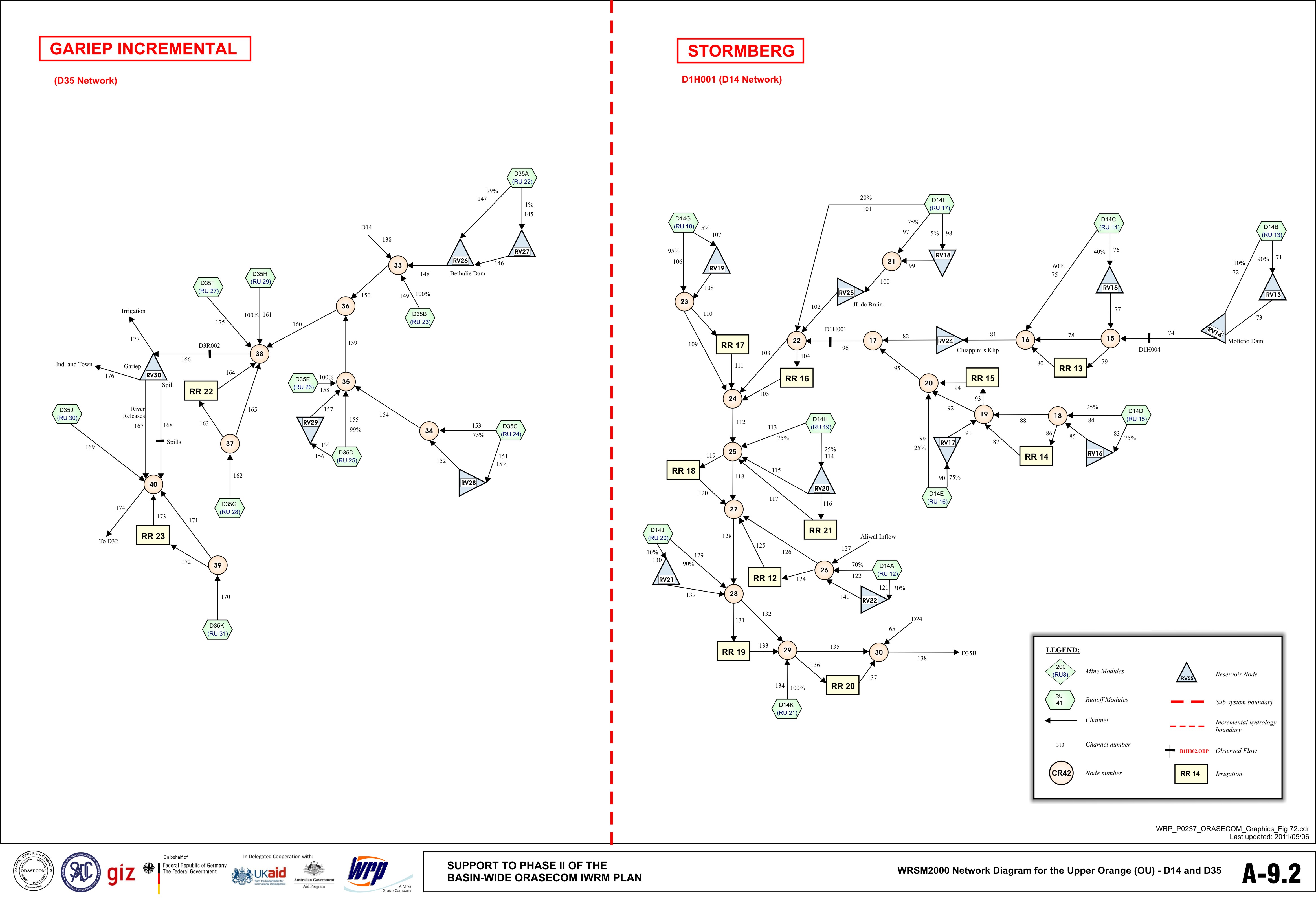 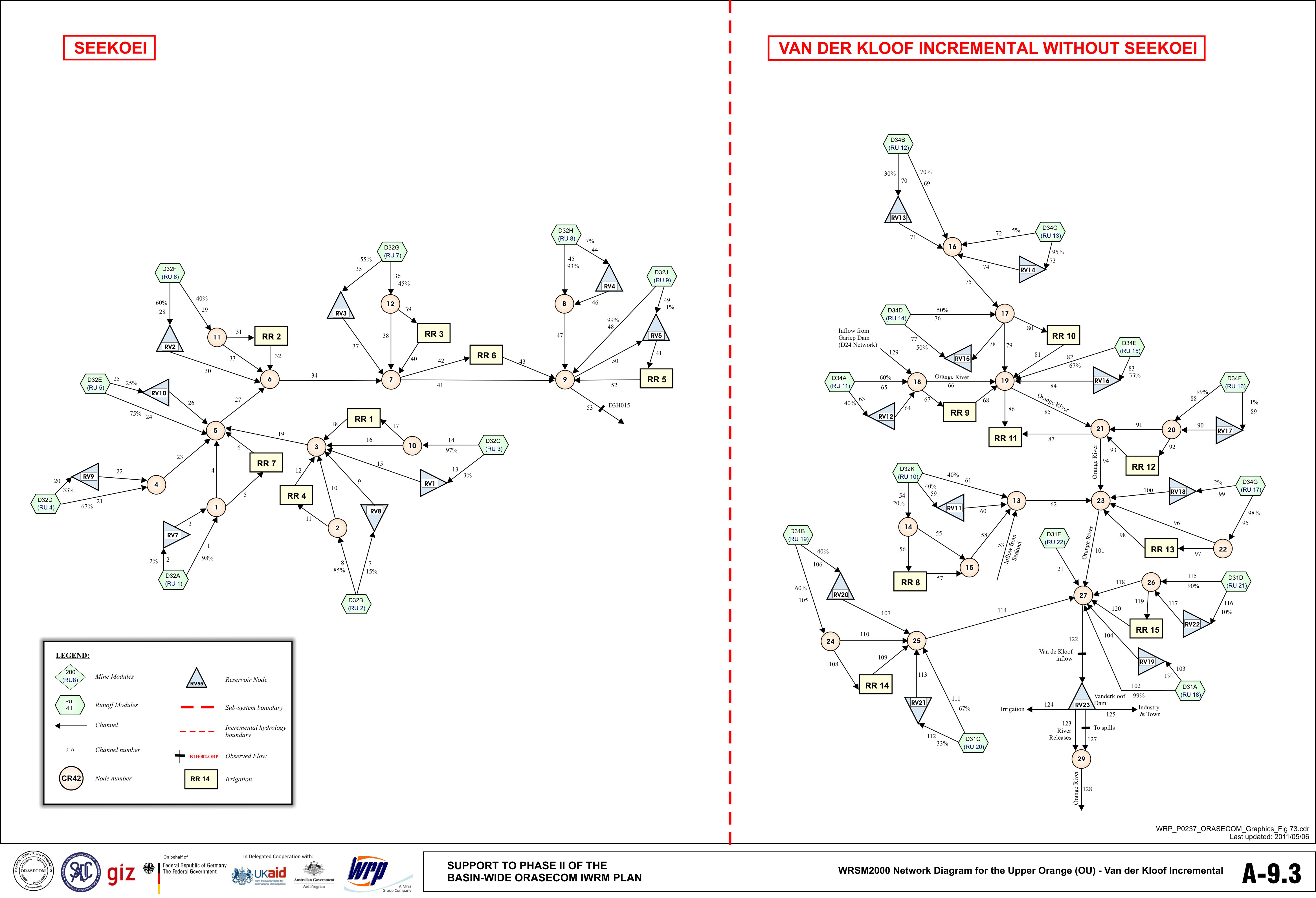