Welcome to the first surface water quantity report of the Orange-Senqu River Commission (ORASECOM), for the hydrological year 2020-2021. For END_OF_DOCUMENT_TOKEN_TO_BE_REPLACED

Documentation and Data: A read-only folder structure of all reports, data, and models related to the STAS can be accessed END_OF_DOCUMENT_TOKEN_TO_BE_REPLACED

Documentation and Data: A read-only folder structure of all reports, data, and models related to this study can be accessed END_OF_DOCUMENT_TOKEN_TO_BE_REPLACED

Documentation: A read-only folder structure of all reports, data, and models related to the STAS can be accessed from here: END_OF_DOCUMENT_TOKEN_TO_BE_REPLACED

The Overall objective of Work package 4 was to carry out a detailed assessment of the occurrence, extent and possible effects of climate change in the Orange-Senqu River basin. This work involved the following:

The main activities undertaken as part of this work package were:

Based on available climate data (up to 2007), there is no clear signal of climate change (both
for temperature and precipitation) in the Orange River basin. Conclusive evidence is hard to
obtain due to the high variability of the local climate where natural variability tends to mask the more subtle influences of Climate Change. The downscaling according to the IPCC SRES A1B scenario yielded the following results: 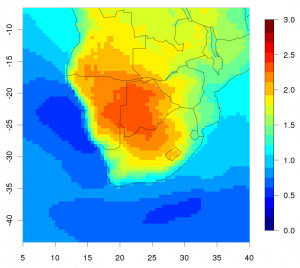 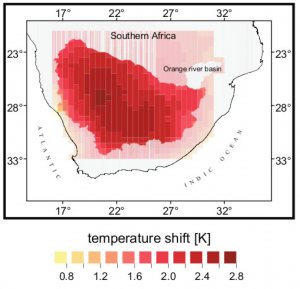 Figure below shows three equally likely climate scenarios as produced by the statistical climate model “STAR”. The images depict the projected change in precipitation for the 2051 to 2060 period compared to the measured average precipitation for the 1958 to 2007 period. The results from the “CCLM” are not shown since they were not found to be reliable and further work in this regard will be required before such results can be used. Of the 100 scenarios generated by “STAR” a dry (5-percentile) is shown on the left, a median wet scenario (50-percentile) is depicted in the middle while a wet scenario (95-percetile) is featured on the right.

The downscaling can be improved with respect to several aspects. The “CCLM” could be finetuned for the region to include various technical improvements such as an improved convection scheme. Another possible strategy in the simulation of the local climate could be to carry out the long term simulation using “STAR. These runs then could be complemented by short term simulations with an improved “CCLM” which will generate extreme event scenarios. An improved “CCLM” could also be used to focus on specific areas by undertaking high resolution runs. Clearly the high runoff areas such as the Lesotho Highlands would be obvious targets.

Furthermore, the latest climate predictions suggested by the International Panel for Climate Change (IPCC) from the Global Climate Model (GCM) are due for release during 2011 which should help to provide greater confidence with the downscaling results.

In many respects the required adaptation measures will look similar to those measures which are already in place or proposed under the various water demand management initiatives.

An adaptive measure of a different kind is to improve the accuracy and reliability of climate change predictions by improving the input data. It is recommended that the climate station network in the source areas of the basin be improved both in terms of spatial coverage and the quality and detail of data.